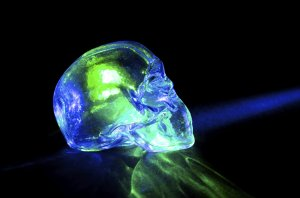 Welcome to Crystal Rock...The Community Page. Crystal Rock is where you can find out about other matters outside of Chris Barclay. This page is also a page for me to honor organizations, people, as well as musicians who deserve the promotion of higher causes more than of my own. This is the place where I will share about greatness in others. There is no greater service than in serving others. The best one can do to be great if they are not already is to emulate the great ones. Please share this page at the bottom. CB

Many ancient societies believed that The Crystal skulls gave the possessors of them magical powers. The ancient Mayans were the most famous to have possessed the skulls.  There are many who believe in their healing abilities and transmitting of energy and conveying information. I think the Quartz Crystal skulls look cool and have a great amount of mystique. Many feel that the Crystal Skull signifies life and the honoring of humanity and the conscious mind.

CB in New York City USA and the VAI Academy
CB travelled to NYC and Saratoga Springs to be part of the Vai academy hosted by Steve Vai. IN CB's own words "hanging with great guitar players, Steve Vai and basing  my self in New York was one of the most inspiring experiences of my life. 'I came back with 3 pages of lyrics and a guitar sound in my head which captures the concrete, steel, green, and glass beauty which New York is. It is a 'Crystal City' 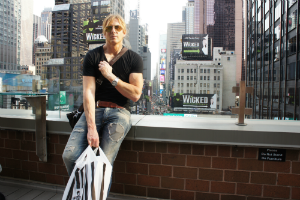 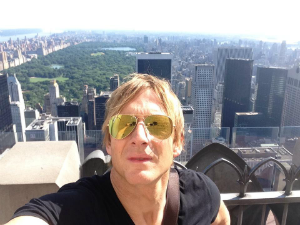 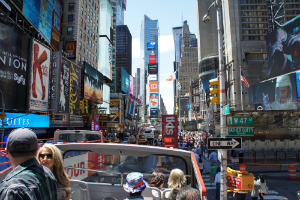 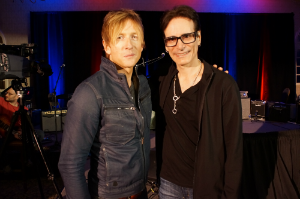 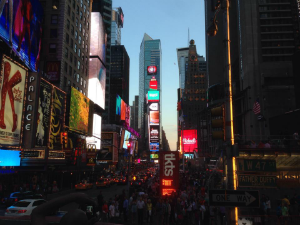 CB got to meet his personal hero and idol, the high Priest of Shred Steve Vai as part of EVO guests whilst Steve was on his Auckland leg of his World tour 'The Story Of Light'.

CB says " it was very surreal and exciting to meet someone of Steve's stature in the guitar world and a personal hero all at once. I have adored Mr Vai since I was teenager. It was overwhelming in many respects. I like to think of my self as a pretty cool cat but as soon as I spent time in his presence I turned into a groupie! I couldn't help myself. Steve Vai is very generous with his knowledge and I really connected to his spirituality. Steve is very big on the power of the mind, visualisation and vibrational energy. Steve Vai is a living metaphysical  messenger of music and the electric guitar and their infinite possibilities. Totally reflected in his playing. Inspiring! Steve spent time answering questions and letting us in on his sound check to see his world class topping band of musicians including drummer Jeremy Colson, Bassist Philip Bynoe and guitarist Dave Weiner. That was a special treat. Steve signed many bits and pieces including my Ukulele which to my amusement, he played and made sing. I was intrigued by his hands and wanted to see how long his fingers and hand are as we are similar in height. I asked Steve if we could compare hand span. Not surprisingly his fingers were far longer than mine. Just another one of his gifts. I also got to really examine and hold Steve's well worn number 1 and loved EVO signature Ibanez Jem guitar.  Steve then went to play a blistering show of sonic proportions in Auckland at the Aotea Centre's ASB theatre. He left Auckland begging for more and he was extremely generous to the fans. Steve is a class act and I was very humbled and inspired to finally meet him. One of my greatest moments." 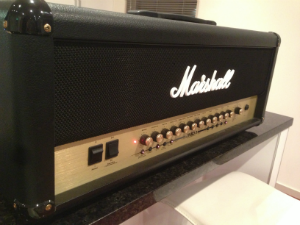 Chris is getting ready to play some new shows live and he wanted a powerful but a simple live set up to dial in his sounds. Chris says "I really don't need  a lot of effects but sometimes I do use various amounts of gain, wahs and delay. Plus I like compression and noise gates. After much research I found that The JMD100 from Marshall could give me great processing power for delay and other effects whilst giving me that Marshall bite for the over driven stuff. It is programmable and compliments my small existing pedal board. What really makes this special is that it was marked and superficially damaged the moment that big earthquake hit Christchurch in 2011. That was a big day in NZ and Christchurch history. It really shocked our country. I spent time in Christchurch shortly after the big quake and felt the after shocks in the following days. It was freaky but those folks in Christchurch lived with that constantly. I barely had a taste and It was very unnerving for me...especially to see the damage to the city. The February quake changed so many peoples lives and turned their world up side down. My sister and Auntie live in Christchurch and they had their lives put on hold. Christchurch is very special to me and it was always my 'big smoke' when traveling from my home town, Invercargill for visits. It is a special place. So when I went to buy a new, perfect JMD100 from the Rock shop I found out that they had this amp as marked Rockshop ex earthquake clearance stock. That was it. I was all over it. I really wanted this amp because of the history associated with it. I thought every time I get to hear this thing vibrate I will think about Christchurch...I also got it cheap but this will always be special to me now. I will remember the moment that earthquake rocked New Zealand and Canterbury. Now I hope to use it to make my own earthquake on stage."

Over the last ten years, Kiwis have registered, dobbed in their mates, fundraised, organised their events and shorn their locks.  Everyone Shaves including individuals, schools, businesses, community groups, families, sports teams, social organisations, universities and so many more.

Leukaemia & Blood Cancer New Zealand (LBC) is the national charity dedicated to supporting patients and their families living with a blood cancer or a related blood condition. LBC receives no government funding. With your help we can continue to fund our core services – patient support programmes, research, information, awareness, and advocacy.

Support Leukaemia...There have been amazing gains in the treatment of blood cancers. Personally I have received amazing treatment that has enabled me to have an incredible life. I am so humbly grateful to the universe and I am in awe of those who have beaten this disease in a way greater than I could imagine. There are others that are battling and fighting the greater fight. I am humbled by their strength and courage.  I am planning on using this page and my music to help bring awareness to the support of the worthwhile cause of helping beat Leukemia and Lymphoma. Please support you local organization or click on the link above this paragraph. 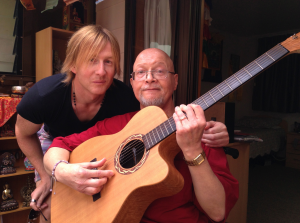 I have been visiting legendary New Zealand guitarist Bill Knox in Auckland. I have been enthralled learning about Bill's guitars and playing experiences. Bill has played as a live and recording session musician with some of  New Zealand's, and the worlds greatest artists since the 1960s including playing guitar for Glenn Frey from the Eagles and has mixed and met George Harrison to Eric Clapton and New Zealand great Peter Poser. Bill was Guitarist for 3 Dog Night. He is good friends with singer and actor Michael Crawford and had associations with the Late John Denver.  Bill was very prevalent in the Auckland live music scene and he has a wealth of knowledge about music. Bill also won a Silver Scroll award in 1966. Bill and I have become friends and It was a pleasure to play on his Taylor. Bill was so kind to let me have a picture of himself and me holding my 07 Martin XC1T. CB

It is a privilege to honor and have Bill on chrisbarclay.net